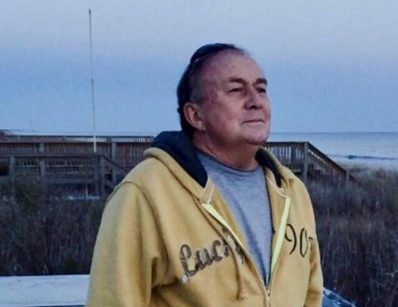 Below is the obituary and celebration of life information for Gerald Brown.

IN THE CARE OF

He is survived by his wife, Janie Britt Brown; a brother, Bill Brown, Jr. of Supply; two sisters, Linda McDonald and husband Gary of Supply, and Sonya Thomas and husband John of Wilmington; mother-in-law, Jane Eason Britt of Fayetteville; sisters-in-law, Mary Lou Edge and husband Greg of Fayetteville, Allyson Lee and husband Benj of Wake Forest; brothers-in-law Jack Britt and wife Karyn of Wilmington, and Bill Britt and wife Dusty of Foscoe; as well as many beloved nieces and nephews. His late father-in-law, Jack Britt, was a strong and special influence in Gerald’s life.

Gerald grew up working in tobacco and helping out on the family farm. His fondest boyhood memories were of his Grammy and Granddaddy Brown, spending time trapping and fishing on the Lockwood Folly River and on Holden Beach, and generally learning about life through these experiences. Later, he spent many happy hours on his Daddy‘s shrimp boat, the “Billy Jim,” shrimping up and down the Atlantic coast.

Gerald began his construction career when he was twenty-one years old. He learned the trade and eventually struck out on his own, becoming a very talented and successful custom homebuilder. The secrets to his success were kindness, honesty, integrity and a sense of humor. His clients often remained friends for life.

He had an infectious laugh, magnetic personality, and his “high-tider” accent could charm most anyone. He could often be heard using his favorite saying, “HALLELUJAH!” He treated everyone he met equally, no matter their station in life. Gerald was passionate about and prioritized helping others, whether it was mentoring a young person, assisting the elderly, or helping friends and neighbors. Those he helped likewise paid it forward by helping others in need. He had a deep love for his family and was a faithful friend. Gerald served his community and cared about the future of Holden Beach.

Gerald received his Associate Degree from Brunswick Community College as a licensed practical nurse; he truly had a desire to both understand and to meet the needs of the people in his community. Though he was never employed in the field, his intention was to work with the elderly.

Gerald was the best husband to Janie, his loving wife of 35 years, who was the love of his life. He always put “Shug” first and supported her in all her endeavors. He was a loving Daddy to Skunk, who was preceeded by Pug, Plumpy, Kosy, Tramp, and Boo.

Gerald was given to the world by God at his birth and, because he is a believer, he is raised up to the heavens to God for everlasting life.

In lieu of flowers, memorials may be given to the Holden Beach Chapel Endowment in the name of Gerald Brown. Gerald created this endowment because he was very passionate about caring for people right here in Brunswick County.

A Celebration of Life Service will be held at the Holden Beach Chapel on Sunday, July 17, at 2:00 p.m.

Fond memories and expressions of sympathy may be shared at www.shallottefunerals.com.

Town News: From the Mayor’s Desk